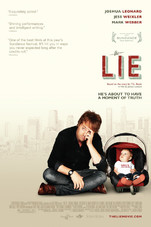 When they first met, Lonnie and Clover were young idealists, but an unplanned baby forced them to flip the script. Lonnie put his music on hold and got a shitty job. And now Clover is abandoning her activism for an "opportunity" in the corporate world. Drowning in disappointments, Lonnie decides he needs some time off work to reexamine his life. He calls in sick, but his abusive boss demands he show up or get fired. Lonnie panics and tells a shocking lie to justify his absence - and once the lie if out, there's no going back. Now it's only a matter of time before the grenade he's thrown on his life explodes and Lonnie is suddenly pushed to figure out who he is, what he wants, and just maybe, what it means to be a father.