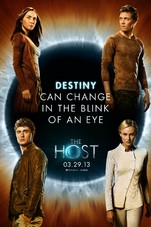 What if everything you love was taken from you in the blink of an eye? "The Host" is the next epic love story from the creator of the "Twilight Saga," worldwide bestselling author, Stephenie Meyer. When an unseen enemy threatens mankind by taking over their bodies and erasing their memories, Melanie Stryder (Saoirse Ronan) will risk everything to protect the people she cares most about - Jared (Max Irons), Ian (Jake Abel), her brother Jamie (Chandler Canterbury) and her Uncle Jeb (William Hurt) , proving that love can conquer all in a dangerous new world.

View All Photos of The Host

Watch All Videos of The Host

A goofball teenage sci-fi romance, "The Host" is an End of Days parable that seems like it was written at a slumber party.
Adam Graham, Detroit News - March 29, 2013

If only the movie played as nicely as it looked.
Stephen Whitty, Newark Star-Ledger - March 29, 2013

Read More Reviews for The Host