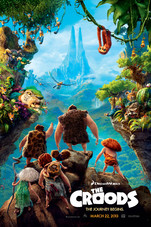 The Croods is a prehistoric comedy adventure that follows the worldâs first family as they embark on a journey of a lifetime when the cave that has always shielded them from danger is destroyed. Traveling across a spectacular landscape, the Croods discover an incredible new world filled with fantastic creatures -- and their outlook is changed forever.

It captures the wonder (and more gently, the anxiety) of discovery time and time again. And the filmmakers have a hoot playing with the Croods' encounters with, as well as their misunderstandings of, all things new.
Lisa Kennedy, Denver Post - March 22, 2013

How to Train Your Dragon" and "Lilo & Stitch" are completely indicative of the experience you'll have with "The Croods," which is to say a supremely positive one.
Laremy Legel, Film.com - March 22, 2013

It may not be an instant animated classic, but it's a charmer that will leave the kids ... feeling warm and fuzzy ...
Kate Erbland, MSN Movies - March 22, 2013

A film which, if not truly sophisticated, isn't nearly as crude as advertised.
Stephen Whitty, Newark Star-Ledger - March 22, 2013

Read More Reviews for The Croods