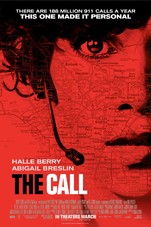 When veteran 911 operator, Jordan (Halle Berry), takes a life-altering call from a teenage girl (Abigail Breslin) who has just been abducted, she realizes that she must confront a killer from her past in order to save the girl's life.

View All Photos of The Call

Watch All Videos of The Call

Let's call The Call what it is: high quality trash that both diminishes and is redeemed by all the talents who have deigned to bring it to life.
Elizabeth Weitzman, New York Daily News - March 15, 2013

If you're going to watch a movie in which two people talk on the phone for most of the film, it's not the worst thing in the world for one of the folks involved to have the face of Storm from the X-Men.
Clark Collis, Entertainment Weekly - March 15, 2013

This is as brain-dead as a movie can be and it assumes the audience will have the I.Q. of a rutabaga.
James Berardinelli, ReelViews - March 15, 2013

It's a lot better than you might expect a movie like this to be.
Stephen Whitty, Newark Star-Ledger - March 15, 2013

Read More Reviews for The Call