The ABCs of Death 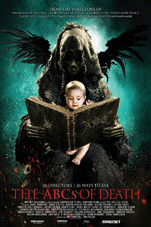 Twenty-six directors. Twenty-six ways to die. The ABCs of Death is perhaps the most ambitious anthology film ever conceived, with productions spanning fifteen countries and featuring segments directed by over two dozen of the world's leading talents in contemporary genre film. Inspired by childrenâs educational books, the motion picture is comprised of twenty-six individual chapters, each helmed by a different director assigned a letter of the alphabet. The directors were then given free reign in choosing a word to create a story involving death.

The ABCs of Death Videos

Watch All Videos of The ABCs of Death

The ABCs of Death Movie Review

Most are exercises in sickening bad taste, with an emphasis on human bodily functions.
V.A. Musetto, New York Post - March 8, 2013

At its best when merging shocks with social commentary, this halting compilation improves significantly as it nears the end of the alphabet.
Jeannette Catsoulis, New York Times - March 7, 2013

It's a feast for fans of the genre and a guaranteed ordeal for everyone else.
Jeff Shannon, Seattle Times - March 7, 2013

There are just too many stories to fit into two hours - and even with fewer weak links, The ABCs of Death might have fallen short all the same.
Ian Buckwalter, NPR - March 7, 2013

Read More Reviews for The ABCs of Death