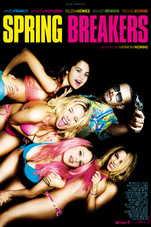 Four college girls land in jail after their Spring Break partying goes off the rails. They find themselves bailed out by a local drug dealer who takes them under his wing.

View All Photos of Spring Breakers

Korine's latest is a characteristically serious film about inherently ridiculous characters, but it's too montonous to be really thoughtful or funny.
Simon Abrams, Chicago Sun-Times - March 17, 2013

"Spring Breakers" is so over-the-top, so-overdone, so extreme, it'd turn even a hedonist off sex.
Stephen Whitty, Newark Star-Ledger - March 15, 2013