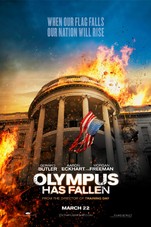 When the White House (Secret Service Code: "Olympus") is captured by a terrorist mastermind and the President is kidnapped, disgraced former Presidential guard Mike Banning finds himself trapped within the building. As our national security team scrambles to respond, they are forced to rely on Banning's inside knowledge to help retake the White House, save the President, and avert an even bigger disaster.

Watch All Videos of Olympus Has Fallen

A typical slab of Hollywood action in which the White House crumbles under attack, the American flag is tattered and tossed aside by baddies, and cliches rise like gods.
Robert Abele, Los Angeles Times - March 22, 2013

'Olympus Has Fallen is just too much of a pale 'Die Hard' ripoff.
Richard Roeper, Richard Roeper.com - March 22, 2013

... the action is often not unengaging, and Butler's better at swinging for faux Bruce Willis ...
Glenn Kenny, MSN Movies - March 22, 2013