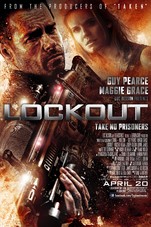 A man wrongly convicted of conspiracy to commit espionage against the U.S. is offered his freedom if he can rescue the president's daughter from an outer space prison taken over by violent inmates.

"Lockout" is meat-and-potatoes filmmaking at its most basic.
Michael O'Sullivan, Washington Post - April 20, 2012

A putrid film that comes dead-weighted with hammy one-liners and a plot so silly it borders on comedy...
Scott Bowles, USA Today - April 20, 2012

"Lockout"...is...as dopey an entertainment as imaginable, but it's also a reminder that the film's star, Guy Pearce, has always had great screen magnetism, to which he has now added a bedrock of muscle. Also: he can act.
Manohla Dargis, New York Times - April 20, 2012