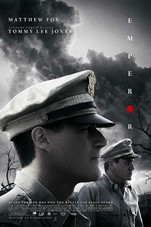 A gripping tale of love and honor forged between fierce enemies of war, EMPEROR tells the story, inspired by true events, of the bold and secret moves that won the peace in the shadows of post-war Japan. Starring Academy Award-winner Tommy Lee Jones, Matthew Fox, and newcomer Eriko Hatsune, EMPEROR brings to life the American occupation of Japan in the perilous and unpredictable days just after Emperor Hirohito's World War II surrender. As General Douglas MacArthur (Jones) suddenly finds himself the de facto ruler of a foreign nation, he assigns an expert in Japanese culture, General Bonner Fellers (Fox), to covertly investigate the looming question hanging over the country: should the Japanese Emperor, worshiped by his people but accused of war crimes, be punished or saved?

Just a dull procedural, with the bland Matthew Fox driving around in a jeep and asking questions and not having them answered.
Stephen Whitty, Newark Star-Ledger - March 8, 2013

The subject is intrinsically compelling, yet the central story is padded with an uninvolving love story that functions mostly as obvious symbolism about compassion for the enemy.
Claudia Puig, USA Today - March 8, 2013