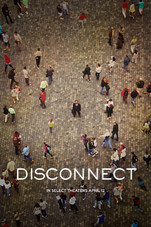 A hard-working lawyer, attached to his cell phone, can't find the time to communicate with his family. A couple is drawn into a dangerous situation when their secrets are exposed online. A widowed ex-cop struggles to raise a mischievous son who cyber-bullies a classmate. An ambitious journalist sees a career-making story in a teen that performs on an adult-only site. They are strangers, neighbors and colleagues and their stories collide in this riveting dramatic thriller about ordinary people struggling to connect in today's wired world.

Watch All Videos of Disconnect

“ It's just better at melodrama than drama. ”

"There wasn't a moment during this movie when I was thinking about anything other than this movie"
Richard Roeper, Richard Roeper.com - April 12, 2013

One of the rare films that directly responds to and expresses modern anxieties.
Mick LaSalle, San Francisco Chronicle - April 12, 2013

There's a movie to be made, perhaps, about the way that electronic devices have created distance between us. But it'd be better if not every story revolved around a crime.
Stephen Whitty, Newark Star-Ledger - April 12, 2013