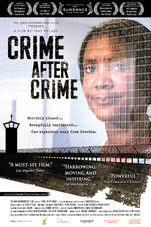 CRIME AFTER CRIME tells the dramatic story of the legal battle to free Debbie Peagler, an incarcerated survivor of domestic violence. Over 26 years in prison could not crush the spirit of this determined African-American woman, despite the wrongs she suffered, first at the hands of a duplicitous boyfriend who beat her and forced her into prostitution, and later by prosecutors who used the threat of the death penalty to corner her into a life behind bars for her connection to the murder of her abuser. Her story takes an unexpected turn two decades later when two rookie land-use attorneys step forward to take her case. Through their perseverance, they bring to light long-lost witnesses, new testimonies from the men who committed the murder, and proof of perjured evidence. Their investigation ultimately attracts global attention to victims of wrongful incarceration and abuse, and becomes a matter of life and death once more.