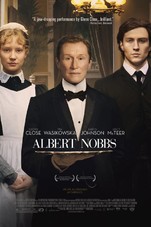 The film surrounding the performance is not always as strong, but the centre holds, and magnificently so.
Kate Taylor, Globe and Mail - January 27, 2012

Albert is at the heart of it all and we see her through her own prism of vulnerability, resulting in a very human story about the search for love, acceptance and understanding of the self.
Linda Barnard, Toronto Star - January 27, 2012