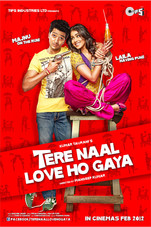 The story of a boy who kidnaps a girl but starts to fall in love with her.

TERE NAAL LOVE HO GAYA is the third film that teams the two talents. This one ought to be their best, right? Well, Riteish and Genelia look great together, no two opinions on that, and the real-life husband-wife team get ample opportunity to sparkle in their third outing. There are hiccups too -- the film dips in the middle of the second hour -- but, thankfully, it comes alive towards the pre-climax moments, which leads to a winning finale. The credit, to a large extent, goes to Riteish and Genelia for rising beyond a commonplace screenplay. On the whole, TERE NAAL LOVE HO GAYA is refreshing and succeeds in its endeavor of amusing and entertaining, more particularly in its second hour. In addition, the sparkling performances by Riteish and Genelia is the mainstay of the film.
Taran Adarsh, Bollywood Hungama.com - February 24, 2012

What's Bad: Some clichéd comedy scenes; lack of justification for the love angle.

Verdict: The entertaining second half and the hit music save Tere Naal Love Ho Gaya and make it a plus fare for Tips and UTV. However, a few of the distributors who have acquired territorial distribution rights at fancy prices will not be able to make money.

Loo break: A couple in the first half.

Watch or Not?: Watch it for getting entertained.
Komal Nahta, Koimoi.com - February 24, 2012

With a story that mildly reminds you of Dil hai Ki maanta nahi and Bunty aur babli, Tere Naal Love Ho Gaya isn't exactly original.The director doesn't shy fromusing cliches like dancing around trees and in the rain and somehow makes them work. There's something about this film that appeals to me, for I grew up watching DHKMN and the likes.The film has its flaws. There's over the top emotional drama, the drunken Genelia scene which is completely unbelievable and mildly irritating. Of course the film could have done without the forced item song, where Veena Malik's artificially abundant bosom tries to charm and fails, but other than that, this one's a fun, breezy watch.Don't over analyse, don't think too much, just go watch and have fun.
Shakti Salgaokar, DNA - February 24, 2012