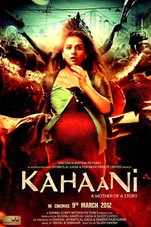 Vidya Bagchi arrives in Kolkata from London to find her missing husband. Seven month pregnant and alone in a festive city, she begins a relentless search for her husband. With nothing to rely on except fragment from her memories about him, all clues seem to reach a dead end when everyone tries to convince Vidya that her husband does not exist. She slowly realizes that nothing is what it seems. In a city soaked in lies, Vidya is determined to unravel the truth about her husband - for herself and her unborn child even at the cost her own life.

Watch All Videos of Kahaani

KAHAANI is a captivating recount from its commencement to conclusion.On the whole, KAHAANI works big time because Vidya Balan makes it come alive. It is several notches above the stuff we've been subjected to in the past. The movie triumphs in evoking emotions. You experience compassion, resentment, defenselessness and triumph at a variety of stages. A wonderful movie-going experience, you come out feeling a sense of pride, pleasure and fulfillment after having watched KAHAANI. Just do not miss it. Hugely recommended!
Taran Adarsh, Bollywood Hungama.com - March 9, 2012

In Kahaani Vidya Balan takes on her role with power and pride. Living out of a suitcase, amongst strangers, she takes on the soul of the city. Her performance leaves you in awe of an actress, who walks through her role as easily as a stroll down Chowranghee Lane. And even that is perfected as a pregnant waddle, add to it her disheveled look and eyes dark with anguish. Sujoy Ghosh's script and direction show no 'pregnant' pauses. It slams home a shock value that a thriller rightly demands. The story totally grips you and leaves you at a dramatic high. This one is Vidya's 'baby'. Ami shotti bolchi!
Madhureeta Mukherjee, Times Of India - March 9, 2012

What's Bad: The narrative style which will appeal mostly to the class audience.

Verdict: Kahaani is an engaging and entertaining movie.

Watch or Not?: Watch it because it's an intelligent thriller told in a novel way.
Mrigank Dhaniwala, Koimoi.com - March 9, 2012

"Kahaani" is one of those rare films that can easily lay claim to being a game-changer. And yet the narrative makes no claims. The destiny of the protagonist is charted in a breathless sweep of urgently persuasive episodes that tumble out as though God wrote Vidya Bagchi's screenplay. Enthralling, absorbing and engaging the narrative never resorts to italicized emotions to get our attention. We are hooked unconditionally from scene one. We surrender to Vidya's journey. She gives us no choice.
Subhash K Jha, IANS - March 9, 2012