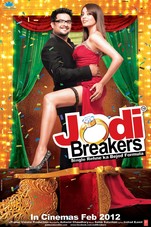 'Jodi Breakers' is an up-beat modern age urban humor. The basic idea around which the story revolves is DYSFUNCTIONAL RELATIONSHIPS WHICH EVENTUALLY LEAD TO BREAK UPS. The film is slated to release in Feb 2012.

Watch All Videos of Jodi Breakers

To put things in the right perspective, JODI BREAKERS is routine, clichéd and formulaic, at least initially. Add lazy and unenergetic too. Director Ashwini Chaudhary doesn't get a grip of things, except in a couple of sequences. But the twist and turns in the post-interval portions are of an interesting variety [writer: Aakash Kaushik], with a major chunk of the second hour succeeding in making you erase whatever misgivings you may have had from the first hour. On the whole, JODI BREAKERS has an engrossing and smartly executed second half that tilts scales in its favor. The right dose of drama and romance, besides a trendy, harmonious musical score, only act as toppings.
Taran Adarsh, Bollywood Hungama.com - February 24, 2012

At first glance, Jodi Breakers has a lot going for it: an unusual and interesting lead pair, fabulous outdoor location (Greece, in this case) and foot-stomping music. But the movie is let down by a script that lacks fizz and connect. Director Ashwini Chaudhary's venture begins as a comedy but gradually morphs into romance and loses momentum in the second half. Jodi Breakers isn't entirely without merit though. Madhavan is earnest. And Bipasha looks stunning. Together they try to make the film better than it actually is. But it simply isn't enough.
Avijit Ghosh, Times Of India - February 24, 2012

First, I can't classify the film. The makers have said it's a film about dysfunctional relationships. It's neither a love story, nor a sex comedy.A "twist" in the "plot" is timed just before the interval, when you are seriously wondering if leaving midway in an empty theatre is an option.The music by Salim Sulaiman blends into a dysfunctional film.
Piyali Dasgupta, NDTV - February 24, 2012

Not really, not with this film. It won't be a happily after ever at the box office because Jodi Breakers, a film that had a lot of potential, is seriously flawed.There could have been comedy, there could have been romance, there could have been moments that make you go Awwww!Instead, the dialogues are juvenile, the situations are oft-seen (how many times have we seen a lusty love guru eye-balling a woman's curves!), the supporting cast fails to, well, support and lead pair share no chemistry.
Savera Someshwar, Rediff.com - February 24, 2012