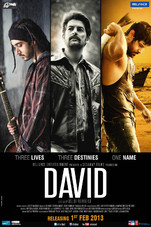 It’s said that everyone arrives and departs with their own destiny, but often the destinies of seemingly un-connected people intertwine to impact many lives. ‘David’ is the tale of three men from different parts of the world, timed in three different eras. While in 1975 London, a 30-year-old David is the protege of a mafia don, his namesake in 1999 Mumbai is a musician. And the third ‘David’ stays in contemporary Goa, and is 40! Film maker Bejoy Nambiar ties the tales of the three… and several others with crafty grit.

Watch All Videos of David