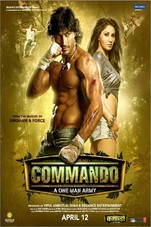 Vidyut Jammwal plays a special-ops secret agent for the Indian Armed Services. During one of the missions the commando’s chopper is shot down & is now behind enemy-lines. From here on the commando embarks on a survival mission battling physically challenging environments, gun totting enemies in foreign land & is en route to his base. The commando uses his intense training, well honed survival & combat skills against the enemy in the face of this extreme environment.

Watch All Videos of Commando

Despite all the bravura technical effort that has clearly been put into Commando, the end result simply isn’t compelling enough to merit more than two stars.
Saibal Chatterjee, NDTV - April 12, 2013

Commando is a string of explosive sequences strung through a story which exists only for the purpose of showing one man, muscles rippling, scything through a mob. Again and again and again. Step out for the popcorn when the actors break into song; rush right back in when the fists start to fly.
Shubhra Gupta, Indian Express - April 12, 2013

Make no mistake, Commando is a poor film. The thrills are never quite there and, all of Janwal's eagerness and leapfrog-skills aside, it must be remembered that a Bowie knife does not Rambo make.
Raja Sen, Rediff.com - April 12, 2013