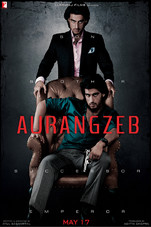 Gurgaon 2013. A family of policemen… A family of gangsters… To bring down a criminal, the law will have to think like a criminal! This summer, there will be only 1 Emperor… Directed by Atul Sabharwal and produced by Aditya Chopra, AURANGZEB stars Arjun Kapoor, in a double role, along with Prithviraj, in lead roles in this intriguing and gripping drama. The film boasts of an enviable and dynamic ensemble star cast of Rishi Kapoor, Jackie Shroff, Sikandar Kher, Amrita Singh, Deepti Naval, Tanvi Azmi, Swara Bhaskar and also launches Sasha Aagha.

Watch All Videos of Aurangzeb

“ Worth a watch! Dark, Hard-hitting & Unpredictable! ”

Performances -- especially of Rishi and Arjun Kapoor -- are the best thing about Aurangzeb, makes it very engaging. Whether all kids inherit their parents’ moral temperament I do not know but where Bollywood is concerned, its conditioning on filmmakers is undeniable. And going by what the inspired but engaging Aurangzeb has to offer, it’s not such a bad thing.
Sukanya Verma, Rediff.com - May 17, 2013

The recurrence of events and people in the climax is the biggest shortcoming of the film. The spontaneity of the story finishes at least 15 minutes before the actual finish, and it doesn't look very fitting after a nice build up. Overall, 'Aurangzeb' is a fun thriller with a racy first half and a dragged climax. It's not devoid of any essential ingredient of a 'masala' film and you can watch it for depicting the dark underbelly of the illegal land deals.
Rohit Vats, CNN IBN - May 17, 2013

The dialogues are apt and have the right amount of punch that is required. The film keeps you intrigued until the very end, but the climax does give a fair idea about what would draw the curtains down. Nonetheless, the ensemble cast will lift the credibility of the film even higher with its performance. 'Aurangzeb' is a film worth a watch for all its complexities!
Gayatri Sankar, Zee News - May 17, 2013

AURANGZEB has a great premise, but great plots don't, generally, translate into great films. This one's way too lengthy and mediocre [second hour] to leave any kind of an impression whatsoever. Disappointing!
Taran Adarsh, Bollywood Hungama.com - May 17, 2013