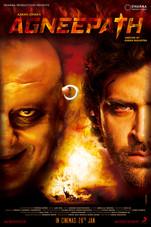 In a small Indian village Mandwa, Vijay Dinanath Chauhan (Hrithik Roshan) is taught by his principled father about the path of fire - AGNEEPATH. His life is completely shattered when the evil drug dealer Kancha (Sanjay Dutt) hangs his father to death. Vijay leaves for Bombay with his pregnant mother and has only one mission in life- to come back to Mandwa and bring back the glory of his father's name. In Bombay, 12-yr-old Vijay is taken under the wings of the city gang lord Rauf Lala (Rishi Kapoor). From then on it is a journey of revenge where he makes and breaks many relationships only to get closer to his aim. Vijay finds support only in his best friend Kaali (Priyanka Chopra), who stands by him at every moment in his life. Fifteen years later his hatred for Kancha takes him back to Mandwa where life comes full circle.

Watch All Videos of Agneepath

“ Must Watch! Its All About Revenge. ”

It's Hrithik Roshan who redefines this Agneepath. He plays the character without the flourish that Bachchan brought, turning him into a ruthless machine for revenge, yet shouldering layers of hurt, pain and rage that make you match step with him on his journey.I'm going with three out of five for director Karan Malhotra's Agneepath. It is in the end, an old-fashioned revenge drama treated in that melodramatic, over-the-top style. You're not likely to be bored by the intense action and the solid performances, but prepare to be exhausted by just how long this film plays on.
Rajeev Masand, CNN IBN - January 26, 2012

AGNEEPATH is an uncomplicated story of revenge, is hard-hitting yet entertaining, dwells on strong emotions and aggressive and forceful action, yet is dissimilar from the original. Most Hindi films initiate with a bang, but run out of gas by the time they reach the finale, often getting deflated in between as well, but AGNEEPATH is vigorous from the very commencement to the absolute conclusion. The conflict at the very initiation and also towards the closing stages, the tension between Vijay and Kancha and also between Vijay and his mother, the game of one-upmanship played by Vijay to grab power… AGNEEPATH is one exhilarating ride. A vendetta story needs to be garnished with several terrific dramatic moments and Malhotra does just that. His handling of the subject deserves brownie points. The only 'hiccup', if one may say so, is the romantic track towards the first hour, which is lackluster. On the whole, AGNEEPATH is a fitting tribute to the masterwork.
Taran Adarsh, Bollywood Hungama.com - January 26, 2012

New Agneepath take an altogether fresh approach to its 22-year-old source. Remakes, however, are a slippery territory. They invite inevitable comparison and yet aspire for an exclusive identity.Moreover what can possibly work in place of Bachchan and his trademarks in an old hat plot riding on themes like Baap ka badla and Maa-bahen ki izzat? The answer is two massive, hysterical villains. Dharma Productions' Agneepath redux, to be fair, belongs to Rishi Kapoor and Sanjay Dutt .Like its original, Agneepath is loud and lengthy revenge sage. And while not as blood-soaked or explicit, it bombards the screen with its escalated, larger-than-life tone, vivid colours and robust imagery. The weaknesses of the original are the failings of this one too -- songs, women and Gaitonde.To me, that's exactly how Agneepath works, less of a remake, more of a tribute. They should have just called it Dharmapath.
Sukanya Verma, Rediff.com - January 26, 2012

What's Good: The arresting screenplay; the performances of the cast; the Chikni Chameli song; the raw action; the canvas, the making and the shot takings; the direction.

What's Bad: The excessive violence, blood and gore; the film is very heavy and a bit too lengthy.

Verdict: Agneepath is a surefire hit, no questions asked! It will shake the box-office today (Republic Day) and in the first weekend.

Watch or Not?: Watch it for so many reasons but be prepared for gore and violence… plenty of it!
Komal Nahta, Koimoi.com - January 26, 2012