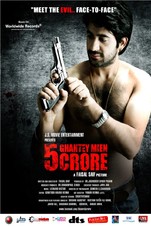 The film tells the story of chartered accountant Vikram (Shawar Ali) and his keep Soniya (Meera) who are waiting for another accountant Muqaadam (Rashid Khan) to deliver 5 crores hard cash at their farm house. Vikram works for Sultan Corporation which is owned by Sultan (Ranjeet). As soon as Muqaadam delivers the money, Vikram and Sonia plan to kill Muqaadam and escape to Singapore next day with 5 crores to start a new life. Vikram and Soniya go exactly by their plan. Enter Karan Oberoi (Abhishek Kumar) whose car breaks down in front of Vikram's Farm House. Karan also happens to be Soniya's junior ex classmate in her college. Muqaadam's girlfriend Reshma (Kavita Radheshyam), An ex Exotic Dancer who is waiting for Muqaadam to return, plans to take matter into her own hands. Then starts a dirty game of love, betrayal, murder and deceit... Three people with 5 hours to go and with 5 crores hard cash..