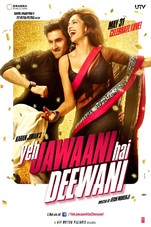 It is a story of the exhilarating and terrifying journey of four characters as they navigate through their youth; from their carefree laughter as they set off on a holiday together in their colleges days, until their bittersweet tears as they watch the first of their bunch get married.

Director Ayan Mukerji’s second outing at the Box Office, after 'Wake Up Sid', is light, frothy at the primary level – and delves somewhat into the deeper recesses of human emotions at the secondary level. However, one thing emerges tall – 'Yeh Jawaani Hai Deewani' is an extremely pleasant watch. In a nutshell, 'Yeh Jawaani Hai Deewani' is no heavy or preachy business. It is meant to be enjoyed and it does its job well. Apart from a few parts where the pace of the film drops badly, Ayan Mukherji’s handiwork is a breezy, enjoyable one.
Ananya Bhattacharya, Zee News - May 31, 2013

Too long by at least twenty minutes, this is a watchable film despite its conventional arc. If light-hearted mush is what you're seeking, you're looking in the right place.
Rajeev Masand, CNN IBN - May 31, 2013

Youth is a many splendoured thing. An alive, fresh vibe dominates Ayan Mukerji's Yeh Jaawani Hai Deewani invigorating you through it's entire run. The story is not novel, but the treatment is A-grade. The first half of the film is a fun-ride. Watching Madhuri Dixit do a ghagra number with Ranbir is a ceeti-moment. At intermission point, the film rightly leaves you yearning for more. The first twenty minutes of the second half is mundane. But the action comes together again at Aditi's wedding.

Note: You may not like this film if a typical, zany Bollywood masala flick is not what you go for.
Meena Iyer, Times of India - May 31, 2013