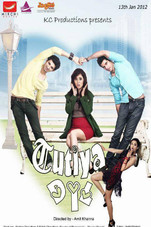 Scrapped knees are easier to fix than broken hearts, don't we all secretly wish we were kids again... people have different ways of dealing with heart break or the end of a relationship, some move on even before the beginning of the end and some refuse to even acknowledge the end, there are those who believe in revenge. Some people lose control and forget who they are, as they start generalising hate to a gender as a whole just because of a bad experience with the opposite sex. Meet Rhea Kapoor, a beautiful, vibrant, level headed girl of today, who changes her life after a sour breakup. This strong, independent, confident, successful girl becomes so unsure of herself that she decides to see a shrink. The story unfolds as Rhea narrates her story to the shrink, hoping he would give her solutions to all her problems. She tells him how from a career-oriented woman she turned into a 16 year old girl, madly in love after she met her new boss, Karan Oberoi and hit it off from day one. Rhea has to face a sudden storm when suddenly Karan dumps her and she is left heartbroken and homeless. There are only two people who stand by Rhea, first is Anu, her best friend who is a quintessential feminist, Anu is Rhea's partner in crime on most occasions, she is someone who keeps getting in and out of relationships and the main reason being that she always looks for some sort of emotional support in a man. Second is Vishal, her senior at office, who is a true womanizer in every sense. Vishal comes across as a nonchalant care free guy but deep inside he is emotional and he helps Rhea overcome her breakup. They both share a unique bond and it is hard to put a label on it but their chemistry is "un-deniable". Tutiya Dil hence is a romantic comedy, a love story gone wrong, gone right, then a bit wrong and finally right again. It's right because the characters are human and relatable. It's wrong because the characters are nuts. It's right again because it's got a racy screenplay, promising and a passionate team. It's wrong because the hero doesn't find his love, the heroine finds her love. That's right! It's a story of today's youth. It's a tragic comedy of 'HEART BREAKS'.