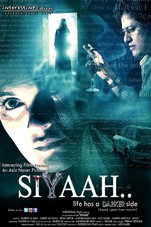 Ved Prakash Sharma leads a very sad and a confusing life post the strange and brutal death of his wife. Ved manages to go on thanks to his lawyer friend Thakur. But all changes when a cop comes knocking at his door. While trapped in the never ending interrogations with the police Ved begins to experiencing unusual happenings in his house. Blaming his driver Maqbool, Ved decides to fire him. Thakur helps the confused Ved by taking him to a psychiatrist who reveals that Ved is actually being haunted by a supernatural force. Ved believes that his wife is back from the dead until Professor Ahmed Chaturvedi; an authority on the subject walks in and clears the myth between the living, the dead and the parallel living beings in the world. A screenplay that twists and turns at unexpected locations with cut throat dialogues, and the ungodly look of Ved's house, complimented with slick scary moments and magnificent underplay by the artistes gives a kick to the horror loving audience.