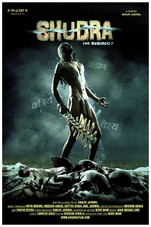 Shudra is based on about 250 million people born Out Caste in Hindu Varna system. They were treated as Unclean & Impure, so much so that nobody ever even touched them or even allowed their shadow to fall on upper cast. They were called by the names of Chandaal, Antyaja, Black Caste, Harijan, Schedule caste & SHUDRA - THE UNTOUCHABLES. An out caste Man 'Shudra' died for want of a sip of water, a child is publicity violated for uttering Holy Mantras, a pregnant woman is forced in the physical submission, a wounded man dies in need of medicine, all for one crime only... Born in the caste of 'Shudra-The Untouchable'. It is believed that nature took ages to make man out of animal, but it took moments for certain men to make their fellow human animal again. They were named differently across the globe like -'BLACKS', 'RED INDIANS', 'DASYU', 'DAS'Chandala, Antyaja, Black Caste, Out Caste, Schedule Caste & 'Shudra- The Untouchable'. 'Shudra- The Rising' highlights the depth of evil human mind can succumb, to cling on to power and supremacy. A historical reminder of the danger of division and segregation, issues which are as relevant today as it was then.