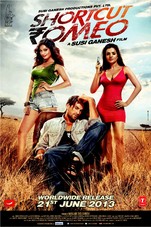 Shortcut Romeo is a romantic thriller film to be directed and produced by Susi Ganeshan, under the banner Susi Ganesh Productions. It is the Hindi remake of the director's own Tamil film Thiruttu Payale (2006), starring Neil Nitin Mukesh in the title role with Puja Gupta as his love interest and Ameesha Patel in a negative character.

View All Photos of Shortcut Romeo

Watch All Videos of Shortcut Romeo

Rich man's wife takes a roll in the hay with a third party. Said roll-in-hay becomes an instrument of blackmail. Blackmailer and blackmailee take turns in trying to outsmart the other. Turns out that the filmmaker has been the smartest of them all, having managed to make a film like this one, and get it out in theatres for the unsuspecting punter to walk in. Suffice it to say, I wasn't feeling very smart when I left the theatre after two and a half hours of this drivel.
Shubhra Gupta, Indian Express - June 21, 2013

SHORTCUT ROMEO is a well-made, stylish crime story with high-voltage drama as its highpoint. It may not boast of A-listers in its cast, but it has ample entertainment and edge-of-the-seat moments to offer. I suggest, give this one a chance!
Taran Adarsh, Bollywood Hungama.com - June 21, 2013

Filmmakers need to realise that not every hit film down south can guarantee a success in Bollywood. Susi Ganesh's couldn't have chosen a worse film than 'Shortcut Romeo' to make his foray into a Bollywood. A remake of Ganesh's Tamil hit 'Thiruttu Payale', the film may have appeared to look slick in the trailers, but the reality is shockingly different. Watch it only if you have no other movie to watch this weekend. I'd rather suggest you to stay at home, actually.
Shomini Sen, Zee News - June 21, 2013