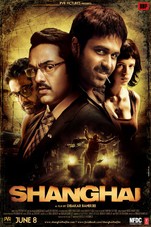 Watch All Videos of Shanghai

Shanghai is consistently watchable and a good film from one of Hindi cinema’s most exciting filmmakers, just not great.
Rajeev Masand, CNN IBN - June 9, 2012

Shanghai warms up slowly, so you need to have patience -- especially in the first half. But the pleasure of the film is in the details. Shanghai doesn’t provide the comfort of answers or happy endings. But it forces us to ask urgent questions. It is the best Hindi film I’ve seen this year. I strongly urge you to make time for it.
Anupama Chopra, Hindustan Times - June 8, 2012

Finally, Emraan Hashmi has let go. Also of hot scenes, hot babes and Himesh-isms. Dibakar can take a bow for that. With crude body language, a pot belly, stained teeth and mawali moves, he perfectly looks the part and pulls off an act he should be proud of. Abhay Deol thoroughly impresses with his cold, restrained and authoritative performance. Add to that a subtle Tamil accent. He doesn't lose grip of his character for even a fleeting moment. Whether Shanghai is off-beat or mainstream is debatable, but if you thrive on rustic realistic cinema, however heavy-duty - this is your pick.
Madhureeta Mukherjee, Times Of India - June 7, 2012

SHANGHAI is undeniably one of the most politically astute films ever made. It keeps you involved and concerned right from its inception to the harrowing culmination. This is not your usual Bollywood masala film, but a serious motion picture that has a voice, that makes you think, that makes a stunning impact. A must watch!
Taran Adarsh, Bollywood Hungama.com - June 6, 2012