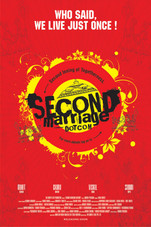 Set against an urban background this story explores the complexities of human emotions which refelect in man-woman relationships. It has romance, comic relief and subtle criticism of our socio-cultural surroundings but at the core of it, its pure human drama involving grief, guilt, struggle and indentifiable characters put in totesting situations. The film kicks off when Akshay, young IT professional from Delhi; only child of a single parent Suneel Narang embarks on a journey to get his father, a widower; married so to finally put an end to his prolonged loneliness. Co-incidentally in Jaipur, a vibrant young girl Poonam is on the same hunt to find a partner for her mother, Shoma; whom she's seen as a divorcee since childhood. They get in touch with each other thorugh a matrimonial website named 'secondmarriage.com' and aftare initial denial of the idea by their parents they finally sail through and get them married. Poonam and Shoma then join Akshay and Suneel into a new adequate flat in Gurgaon and a distinguished family scenario arises for the four, filled with a new cook hailing from a rustic backgorund, Bihaari and a north-eastern maid Flower. Suneel and Shoma are not at ease with each other to start with but gradually sparks of romance start to fly off. Poonam and Akshay who'd become good friends from the word go and who themselves are lonely souls with bitter memories; are happy to discover a feeling which;d always eluded them - the joy of a family. But, little does anyone know the course of destiniy and upheaval which it is to bring to their family and which shall germinate from the seed of love! Its when Poonam and Akshay find themselves in love with each other after a night of irrepressible emotions which result into an inconceivable event; that the happiness of the four goes for a toss. The story takes sharp turns and explore dark zones of the human psyche before the characters finally square up for an unaccustomed but fairly logical solution to their stiuation.