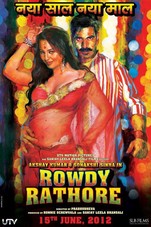 Shiva (Akshay Kumar) is a small time conman in love with Priya (Sonakshi Sinha), a pretty girl whom he met at a wedding he wasn't invited to. Into this picture perfect world enters six year old Neha who inexplicably believes Shiva to be her dad! And if this wasn't bad enough, Shiva also becomes the object of a series of life threatening attacks by a gang of deadly criminals who seem to know something he doesn't. While trying desperately to save his life and love, Shiva stumbles upon a deadly secret. A secret that will take him to a small town in Bihar; a town terrorized by its ruthless MLA and the mafia he controls; a town whose inhabitants' only hope for redemption is Shiva!

Watch All Videos of Rowdy Rathore

Rowdy Rathore is entertaining in parts. You'll enjoy it if you do not have too many expectations. Watch out for the return of Akshay Kumar to some serious comedy and action!
Mrigank Dhaniwala, Koimoi.com - June 3, 2012

Ridiculous and undeniable, it's a punchy cartoon, rightly confident of its power to entertain. Why resist?
Rachel Saltz, New York Times - June 1, 2012

Apart from Akshay, Sonakshi and Yashpal Sharma, the rest are unconvincing, as is the villainous set-up itself. Fans will love Akshay's mooch-twirling masala-act but be ready for hardcore action too - some pretty gruesome.
Srijana Mitra Das, Times Of India - June 1, 2012

Riddled with an array of loud, lame and specious contrivances, Rowdy Rathore plays out pretty much like a comic-book fantasy rendered in the form of a live-action film. Go for it if you must, but don’t expect the earth from it.
Saibal Chatterjee, NDTV - June 1, 2012