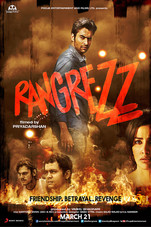 Rangrezz is a Hindi remake of Tamil hit film Naadodigal. It is a movie on and about friendship!

RANGREZZ has an impressive first half, but loses focus in the post-interval portions. One definitely expected more!
Taran Adarsh, Bollywood Hungama.com - March 21, 2013

The boy buddies put in their best, but this film could have done with a dash more of colour.
Madhureeta Mukherjee, Times Of India - March 21, 2013

Rangrezz is a powerful social drama that brims with the urgency of the young and the audacious. Its ideology may be deeply flawed but perhaps that’s the point the film is trying to make: being clueless; and often misguided while being young is probably the right way towards self-discovery.
Ankur Pathak, Rediff.com - March 21, 2013

Priyadarshan loses track mid way and instead of exploring new ground often falls back on his tried and tested formula which seems outdated. Had the screenplay focused on the dynamics and interpersonal play between the friends and lead to a climax that wasn’t bulldozed by heavy dramatics and lengthy dialogues, Rangrezz might have had a different verdict.
Tushar Joshi, DNA - March 21, 2013