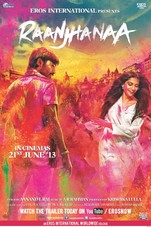 Not yet provided by studio.

Watch All Videos of Raanjhanaa

RAANJHANAA encompasses romance and myriad emotions most wonderfully, besides bravura performances and a popular musical score from the maestro. A film that touches the core of your heart. A film that's definitely worthy of a watch. Not to be missed!
Taran Adarsh, Bollywood Hungama.com - June 21, 2013

Raanjhanaa is a love story that has a Shakespearean touch and is mounted on a lavish scale. Set in Benaras, in a sense, the heart of India, the first half in the vibrant city where the Ganges flows, just sweeps you off your feet with its colour and feel. All of a sudden, Raanjhanaa seems like two different films. In the first half, it is an interesting, intense, introspective love story, where you empathise with the characters. In the second half, the love story gets diluted to make way for gobbledygook political ideology that is an irritant. Note: You may not like this film if you cannot digest brooding love stories.
Meena Iyer, Times of India - June 21, 2013

In Raanjhanaa, a guy from Benares tests his owns limits to the extent he’ll go for the girl he's been besotted by ever since he was a little boy. Endeavours that begin this early have a way of getting out of hand and exasperating. But Rai has Dhanush -- wonderful, tangible, indefatigable Dhanush, and the actor in his first Hindi film holds fort from start to finish. What this tells you: Raanjhanaa isn’t easy viewing. Kundan and Zoya aren’t easily likeable. They have flaws. They make mistakes. Blunders, really. But Rai shows them for what they are; he never paints a pretty picture. And this brutal honesty coupled with a commanding Dhanush is what works.
Sukanya Verma, Rediff.com - June 21, 2013

Raanjhanaa, scripted by Tanu Weds Manu writer Himanshu Sharma, is a love story with a huge difference that benefits no end from a clutch of exceptional performances. The film defies the expectations of the audience at several crucial junctures and holds out absolutely no apologies for springing abrupt surprises. If you are among those that helped Yeh Jawaani Hai Deewani rake in all those crores at the box office, you owe it to yourself (and to the cause of popular Hindi cinema that entertains with more than just song and dance and star power) to vote for Raanjhanaa with your feet.
Saibal Chatterjee, NDTV - June 21, 2013