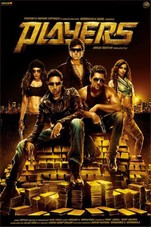 It's time to steady your selves for the biggest action extravaganza that Bollywood has to offer! The dynamic director duo Abbas-Mustan are back to enthrall the audiences one again with the lean and mean heist flick PLAYERS. The movie is the official remake of the 2003 Hollywood blockbuster, THE ITALIAN JOB and promises to be just as much of a thrilling ride! With a stellar cast of Abhishek Bachchan, Sonam Kapoor, Neil Nitin Mukesh, Bipasha Basu, Bobby Deol, Sikander Kher and Omi Vaidya, this remake promises to pack one heck of a punch. PLAYERS is scheduled to set the screen ablaze in January, 2012. With high speed chase sequences and state-of-the-art special effects set against the backdrop of gorgeous locales in New Zealand and Goa, PLAYERS will redefine Bollywood action movies as we know them. And hang on to your seats, because this ride has just begun.

PLAYERS rides mainly on the clout of its credible director duo [Abbas-Mustan], daredevil stunts and stunning visuals. But, most importantly, it is deficient of a captivating screenplay. Also, the film could have done with judicious trimming for an enhanced impact. I for one went in with colossal expectations, but came out feeling downcast and disheartened.
Taran Adarsh, Bollywood Hungama.com - January 6, 2012

What's Good: The train robbery sequence; some comedy in the second half; Omi Vaidya and Neil Nitin Mukesh's acting.

What's Bad: The loose and uninteresting screenplay; the poor music; the dull acting of Abhishek, Sonam and Bobby.

Verdict: All that glitters is not gold. This gold rush adventure will not see people rushing to the cinemas.

The Italian Job has been entertaining its viewers as amongst Hollywood's most fascinating thriller films.Can you expect something like this from our desi Players, a supposedly Indian vision of the Italian Job? Eventually, it is Neil Nitin Mukesh (Spider), the ultimate no-strings-attached man, wild gambler at heart with a twist in the soul and tango in the feet, who slam dances his way away as the ultimate crook. Music by Pritam is good while it lasts. Some editing sorely needed, visual imagery quite polished, and the look as usual is of new age Bollywood. All you brave Indian filmmakers, do pick up classics, but first, get a bit classic yourself and learn about cult film making which is so much different from commercial cinema. You'll find the difference. Your Bollywood ventures like Players end up like cold cuts - stylishly done - are so different from piping hot goulash.
Nikhat Kazmi, Times Of India - January 6, 2012