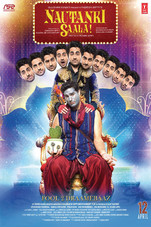 Ram Parmar (Ayushmann Khuranna) one night meets Mandar Lele (Kunaal Roy Kapur) who is troubled and lonely. It is the story of their bonding and friendship. It's a comedy of errors where all of RP's acting skills are tested to the limit as he improvises his way through a hilarious real life drama, complemented by the loose cannon that is Mandar Lele! The film directed by Rohan Sippy, starring Ayushmann Khurrana, Kunaal Roy Kapur in the lead roles along with Pooja Salvi and Evelyn Sharma.

Watch All Videos of Nautanki Saala!

“ Neither Amusing, Nor Boring. ”

Like the title suggests, it’s all empty theatrics. Newcomer Pooja Salvi is about as expressive as a sack of grains. And wait, the film also has the unique distinction of capturing one of the longest on-screen smooches in a long time.. shot in such excruciating close-up that you might throw up your lunch.
Rajeev Masand, CNN IBN - April 12, 2013

The story is refreshing; the theater-like treatment (sets, props, costumes) is dramatically different. This is no Shakespearean act, but there's enough drama, demons and devtaas to rival our desi phantoms of the operas.
Madhureeta Mukherjee, Times Of India - April 12, 2013

'Nautaki Saala', pegged as a comedy of errors by its makers. True, a 'comedy of errors' it is, but the errors outnumber the logic (if any) the film has. Watch 'Nautanki Saala' only if you really want to.
Resham Sengar, Zee News - April 12, 2013

Nautanki Saala is a colloquial term often attributed to someone who is overtly dramatic yet amusing. While the film is thankfully not melodramatic, it isn't much amusing either!
Gaurav Malani, Economic Times - April 12, 2013