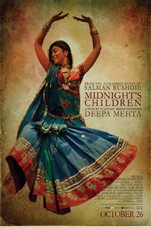 "Born in the hour of India's freedom. Handcuffed to history" Midnight's Children is an epic film from Oscar-nominated director Deepa Mehta, based on the Booker Prize winning novel by Salman Rushdie. At the stroke of midnight on August 15, 1947, as India proclaims independence from Great Britain, two newborn babies are switched by a nurse in a Bombay hospital. Saleem Sinai, the illegitimate son of a poor Hindu woman, and Shiva, the offspring of wealthy Muslims, are fated to live the destiny meant for each other. Their lives become mysteriously intertwined and are inextricably linked to India's whirlwind journey of triumphs and disasters. From the unlikely romance of Saleem's grandparents to the birth of his own son, Midnight's Children is a journey at once sweeping in scope and yet intimate in tone. Hopeful, comic and magical - the film conjures images and characters as rich and unforgettable as India herself.

Watch All Videos of Midnight's Children