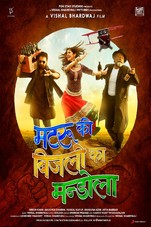 Set in the rustic surroundings of a village in Haryana, Matru Ki Bijlee Ka Mandola is a comedy-drama about Harry Mandola (Pankaj Kapoor), a wealthy industrialist who loves his drink, his daughter Bijlee (Anushka Sharma) and the unusual bond they both share with Harry's man Friday, Matru (Imran Khan). Much to her father's delight, Bijlee is all set to marry Baadal (Aarya Babbar), the son of a powerful politician Chaudhari Devi (Shabana Aami). This alliance which is far from just being a simple union of two young people becomes the seed for a story that brings twists and turns in the lives of Matru, Bijlee and Mandola.

“ Ambitious But Inconsistent Story. Watch it for Pankaj Kapur. ”

It’s ambitious but also indulgent and inconsistent in tone, making the film a jerky ride. Some stretches are clunky, but just when you’re starting to get restless a terrific scene grabs you – like Chaudhari Devi's creepily mesmerising monologue on why corruption is essential. Azmi is wonderful, as is Kapoor, who manages to be, in equal parts, childlike, endearing and nasty. But the big surprise is Imran Khan, who sheds his urban, chocolate boy baggage. It’s an exciting transformation. Despite this, Matru ki Bijlee ka Mandola feels like a puzzle in which all the pieces don’t fit. Its idiosyncrasies are both its strength and its undoing.
Anupama Chopra, Hindustan Times - January 11, 2013

This outrageous comedy after shows little concern for our health as it delivers laugh after side-splitting laugh. Matru Ki Bijlee Ka Mandola might well be described as Bhardwaj's holiday movie - a mad story with crazy characters - but fortunately for us, even in a light mood, the director can be counted on to say interesting things. The year's first gem has arrived - don't miss it!
Rajeev Masand, CNN IBN - January 11, 2013

Matru Ki Bijlee Ka Mandola starts off on a promising note but falters towards the end. At times, the film is hilarious, and reminds you how much fun Bollywood cinema can be, and at other times, it is dull, disappointing, and quite annoying. Bhardwaj brings high energy to some parts of the film. As always his musical compositions and background score are delightful. But his storytelling skills are not well-honed here. So, unfortunately, MKBKM does not deliver all that it promises.
Aseem Chhabra, Rediff.com - January 11, 2013

With its Trilbys and tractors, malls and Maoism, its stretch limo and smart-boy! lines, MKBKM could have been such a fun ride. But sadly, director ka bhi man dola, rather too often. Like champagne gone flat, the film's left lying about for too late, its plot meandering everywhere.
Srijana Mitra Das, Times Of India - January 11, 2013