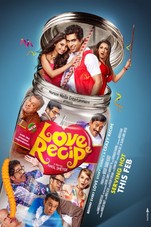 Love Recipe is a fresh comic caper filled with vibrant characters led by the pair of Rahul and Tia. Rahul a DJ by profession is of the opinion that Hindustaniyat is not about clothes or language and that it has to come straight from the heart. Wearing jeans and tee-shirts will not make him less Hindustani than anybody else. So Tia's father Pratap Singh's strange obsession with Hindustaniyat makes Rahul a total misfit in Pratap Singh's scheme of things. But A news which announces the reward of 50 crore rupees on an international terrorist named Carlos Randall's head is going to change their love story for good. Meanwhile Carlos, the international terrorist is being briefed by Music Ali, a freaky terrorist leader immersed in old Hindi film songs. The plan is to blast a peace conference happening in Mumbai ten days from now. He sets out on his mission giving rise to another hilarious track. In a freaky incident Carlos en route his mission gets his head severed and the severed head somehow manages to end up in Rahul's custody. Getting rid of the head becomes the main concern out of which many hilarious situations occur as Rahul and Tia are yet unaware of the fact that the head is of the international terrorist Carlos on which such a huge reward lies. But fortune provides an opportunity to Rahul to prove his patriotic zeal to his prospective father-in-law when a news telecast announces that the severed head that has been missing belongs to none other than Carlos Randall. Situations lead to an interesting climax and Rahul becomes responsible for causing the arrest of the dreaded terrorist Music Ali Pratap Singh can get no bigger a hero than Rahul for his son-in-law and all ends on a happy note.

View All Photos of Love Recipe

Watch All Videos of Love Recipe