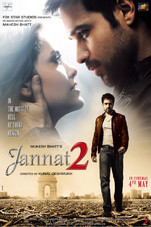 Jannat 2 is the story of Arjun dixit (played by Emraan Hashmi). His quest for personal heaven, creates hell for all those around him, until he breaks away from it all with the help of Ins pector Vijay thakur (Imran Zahid). Arjun is a smooth talking street- smart gun runner, who has the gift of the gab and knows his trade inside out. Vijay is a hardened maverick cop, who has a personal vendetta against the gun nexus. He will go to any length to crack down this nexus and he handpicks Arjun for the job. Knowing that he is the perfect candidate, Vijay lets Arjun enter this racket undercover and expose everyone involved in the illegal gun trade. Along his journey, he falls in love with a beautiful young doctor Soniya (played by Esha Gupta). This throws his life's course into a tailspin with unforeseen and far- reaching consequences.

Watch All Videos of Jannat 2

“ Jannat 2 is an Entertaining Fare! ”

JANNAT 2 is an engaging film with tremendous appeal for the masses. An absorbing story, a swift and coherent narrative, exemplary direction, fantastic action, soothing music and stellar performances summarize the highlights of this triumphant franchise.
Taran Adarsh, Bollywood Hungama.com - May 4, 2012

Though the film belongs to the Jannat franchise, it is predictable, dull and extremely boring in the first half. While, the second part too creates no hope for an engrossing moment for the onlooker. Delhi has been used as a backdrop for the crime of arms trafficking and romance has been induced to make Jannat 2 a complete Masala flick, but the attempt is tasteless.Music is one of the reasons that might develop a curiosity for the film. A predictable and extremely tiresome attempt will be one reason to stop you from buying a ticket. Though the climax might spring a surprise, but by then it becomes too late for one to react for appreciation. For all those Emraan's fans, who can endure anything to see him on-screen- this one's for you. But still we would say, beware. This Jannat is far away from fairytales!
Daily Bhaskar, Dainik Bhaskar - May 4, 2012

Director Kunal Deshmukh shoots off gritty action and gushy romance, combined in unequal proportions. The chase sequences give you a shot of adrenaline and the action is high-tension. Although random romantic moments and too many songs break the pace of the story (Shagufta Rafique). The climax is touching, but for a thriller, there are several predictable turns, minus the twists. The dialogues are crude, but suit the rawness of the film, and the actors use cuss words as liberally as their guns. The music (Pritam) is memorable, but only till the next Bhatt album release.Jannat 2 is a decent crime caper, but doesn't shoot you between the eyes.Tip Off: If you don't have an appetite for crude desi gaalis, be armed before watching this one!
TNN, Times Of India - May 4, 2012

A lot would have been forgiven -- as it often is with these producers -- if the film had either a meatier plot or a more gripping narrative, but this one's just tiresome as the obvious story drags on. A couple of chase sequences, particularly one through the arteries of a Dargah, are slickly shot, but even these lose their charm as they get needlessly long-winded. And finally, telling a bad actress she looks like Angelina Jolie is just cruel -- to both her and to the audience forced to sit there while she tries to smile coyly through a silly pout.
Raja Sen, Rediff.com - May 4, 2012