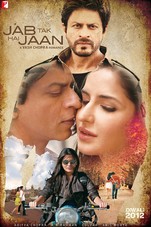 Yash Chopra's last labour of love was his dream ever since his last outing as a director with Veer-Zaara. His untimely demise three weeks before the release of his last film makes this film even more special for fans of Yash Chopra and now the title "Jab Tak Hai Jaan" (Till my last breath) captures the legend and his passion for cinema. This is Bollywood at its best! The film stars The King of Bollywood - Shah Rukh Khan, Katrina Kaif, and Anushka Sharma. Music is by the Oscar-winning A.R. Rahman and produced by Aditya Chopra.