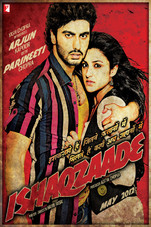 Rising from the ashes of hooliganism and small town clan wars, comes the love story of a passion ignited by hatred. Of two people. Born to hate. Destined to love. One kingdom.One throne.Two wild animals... unpredictable Parma... ferocious Zoya.A battle... deafened by sounds of hate, revenge, bullets and deceit. A story... about two fiery bloods played by Arjun Kapoor and Parineeti Chopra, and their fight for power and supremacy. A story about love brewing in a small town burning with hatred. A story called ISHAQZAADE.

Watch All Videos of Ishaqzaade

ISHAQZAADE depicts the love story of two defiant, rebellious individuals. A passionate love story ignited by extreme dislike. It revolves around two disputing political families, two fiery individuals and their battle for control and superiority. In such a setting, when two people, who have been loathing each other all this while, fall in love, things go askew.The post-interval portions have several euphoric moments. On the whole, ISHAQZAADE, a volatile and intense story with ample doses of fanatical romance, should appeal to a pan-India audience. This broadly engaging love story has a winsome pair who deliver dexterous performances, besides popular music and several poignant moments, which should appeal to fans of mainstream films. Go for it!
Taran Adarsh, Bollywood Hungama.com - May 11, 2012

There is much craft on display, and some lovely moments, but the immense promise shown by the first half turns out as hollow as a politician's. Soaked in sloppy sexism, the second half has the heroine repeatedly tortured -- cheated, slapped, bound, gagged, shot at and abused -- and yet the film decrees that she forgive. In the heartlands the film is set in, maafi is an all-absolving concept, an irretractable token of instant forgiveness, like a church confessional. Ishaqzaade, despite its artistry, deserves no pardon.
Raja Sen, Rediff.com - May 11, 2012

Sadly, Ishaqzaade isn't quite as pulsating as the plot line might suggest. The script throws up some surprises all right, but the story of inter-religious love does not have legs robust enough to gallop all the way through to the end with sustained energy.After a startling end to the first half, the film's pace drops several notches in the second half as the lovers seek refuge in Chand Bibi's brothel. If only Arjun Kapoor's dialogue delivery had greater punch and Parineeti Chopra could pull off the emotional moments without going shrill, Ishaqzaade would have been a markedly better film.
Saibal Chatterjee, NDTV - May 11, 2012

With a bit of 'Romeo and Juliet' interspersed in the story line, 'Ishaqzaade' captures a love story in a small town of northern India where the Muslim girl is allowed to have shikaar as a hobby but is not allowed to get married to a Hindu boy - a political rival's grandson.The plot is racy and the narrative does not waste too much time in establishing the love story. That perhaps can go against the film, since the transition from hate to love for the lead protagonists happen a bit too quickly, leaving the viewer wondering whether it is that easy to love and hate a person.The film keeps you engaged in the first half and the important twist right before the break is truly mind blowing. The second half unfortunately loses pace and the predictability creeps in by the end of it.
Shomini Sen, Zee News - May 11, 2012