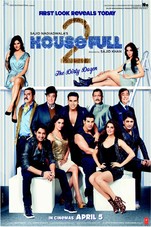 View All Photos of Housefull 2

Watch All Videos of Housefull 2

“ Entertains on Many Counts! Akshay is Superb! Its a Bag of Laughs! ”

Housefull 2, directed by Sajid Khan, is 'bigger' than the last film, but not necessarily better. To be fair, you can't use words like 'better' or 'funnier' to compare these films; and asking me which one I preferred out of Housefull and Housefull 2 is like asking me what I'd rather have between a migraine and a hernia. Thank you, but I'll pass.Housefull 2 is for four-year-olds who don't know any better. For anyone with taste, or anyone seeking genuine laughs, there's nothing here. I'm going with one out of five for director Sajid Khan's Housefull 2. I'd rather watch reruns of his TV shows instead; they were pure gold compared to this drivel!
Rajeev Masand, CNN IBN - April 6, 2012

If you are one of those who cares less about logic and rationale, but looks at movies that not only entertain, but also act as stress busters, HOUSEFULL 2 should slake your craving in those two hours. On the whole, HOUSEFULL 2 is a madcap entertainer that gets the viewer giggling, yelling, whistling and applauding in his seat and you completely savor the fact that the spectators parked around you too are utterly engaged in the chaos and seeking maximum pleasure from the on-screen happenings. If you are a moviegoer who derives pleasure from loud comedies with over-the-top humor that defy logic at every opportunity, I am sure, you will relish this wacky slapstick. If your idea of watching a comedy is to have a good time at the movies, then HOUSEFULL 2 is especially designed for you.
Taran Adarsh, Bollywood Hungama.com - April 6, 2012

Sajid Khan's Housefull 2, a grotesque film that seems to have been put together by a particularly sadistic ten-year-old. Look, I have nothing against stupid comedies. The keyword, however, for Khan's films is that he stresses the stupid part much too much, and all at the expense of the laughsHousefull 2 is shamefully bad. So bad that Ranjeet - the rapey villain of yore - who appears in one scene, is the most dignified thing about the film.
Raja Sen, Rediff.com - April 6, 2012

Housefull-2 is a bag of laughs with eye-candy - Akshay in linens, Jacqueline in minis - and some crackling performances.The film belongs to Akshay Kumar who carries off a sharp suit and 'jhaari-mein-chalein' jokes with glossy aplomb. And to Sajid Khan who, despite a smorgasbord of stars, ensures one prevails - the mad storyline. The music (Sajid-Wajid) could have been punchier while some scenes sag. But with cracks like, "Aasman se gire, Khajuraho mein atke," as Akshay parachutes down on his mum-in-law, you can't complain - unless you were looking for Einstein, of course.
Srijana Mitra Das, Times Of India - April 6, 2012