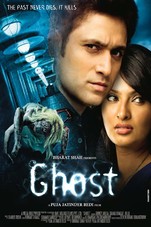 City Hospital witnesses a chain of blood curdling spine chilling murders. A beautiful young recruit Dr. Suhani (Sayali Bhagat) is faced with uncanny happenings at the hospital. She is stunned by the monstrous force that sweeps out of the night to cause a trail of gruesome killings. What or who is responsible for this strange murderous destruction? The murderer uses a unique methodology, leaving behind no trails, defying all human comprehension. A leading investigating agency entrusted with the case, assign it to their most competent officer Vijay Singh (Shiney Ahuja). Vijay a debonair romantic young detective moves intelligently to gather information about the mysterious murders. Among the first he questions is Dr.Suhani. There is immediate chemistry between the two. The culprit moves again and we witness more horrifying brutal killings. Success eludes Vijay but he gets passionately involved in the case treating it as his personal war against the slaughterer. What follows is an exciting path of love, intrigue, passion, deceit, revenge and nerve wrecking treachery. Finally, God proposes and evil disposes. An ode to horror lovers here is a truly original story that is brutal and bloody. It has portrayed the most frightening encounters between good and evil, that audiences will experience for the first time in Indian Cinema, the most ominous and brutal butchering. There are full scenes that one would experience and see clearly in One's dreams and perfect examples are the murder sequences in the film which are a real terror. Gore and blood are the highlights of the film. The story is simple but engaging.

Written and directed by Puja Jatinder Bedi, this staggeringly silly film has a plot so convoluted and far-fetched, you'll be rolling your eyes more than the ghosts in this film do.The film doesn't have any good scares to speak of, just lots of bad dialogue and a laughable background score.Ghost isn't even one of those films that's so bad, it's fun to watch. No, it's utterly and entirely painful and tiring to sit through, because every inconsequential detail is repeated over and over again, and all that the characters in this film do is state the obvious.I'm going with a generous half out of five, yes half out of five for Ghost. 'Ghost' is a staggeringly silly film...
Rajeev Masand, CNN IBN - January 13, 2012

The problem with GHOST is that the scares are scarce, despite some twists and turns injected in the plotline. Regrettably, the story goes for a toss thanks to the interrupting song and dance routine [with autopilot choreography], the listless romantic track between the lead pair [looks completely forced in the narrative] and a patchy screenplay.GHOST boasts of a couple of spine-tingling scary scenes, but a few spooky scenes does not a horror film make. On the whole, the scares in GHOST are inadequate and ineffectual. One expected so much more from the scary movie.
Taran Adarsh, Bollywood Hungama.com - January 13, 2012

Ghost is the kind of film you should never watch alone. Not because it will spook you but for the only reason that mazaa toh sab ke saath aata hain! Fun is always multiplied when shared with friends and Ghost belongs to that genre of unintentionally funny films that enjoy cult status with connoisseurs of, what one may call as, accidental entertainment.Coming back to its original fan-club, Ghost is killer stuff in the unintentionally funny zone. Just ensure you have likeminded company and be prepared to laugh like hell!
Gaurav Malani, Times Of India - January 13, 2012

What's Bad: The uninspiring script; the lack of the scary element in the horror scenes; the ordinary performances of the lead actors; the slow pace; the inane dialogues.

Verdict: Ghost will haunt its makers with poor box-office collections.

Watch or Not?: Watch it if you like horror dramas even if they aren't chilling.
Komal Nahta, Koimoi.com - January 13, 2012