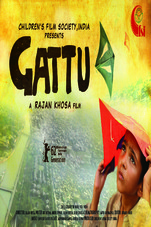 'Truth with triumph in the end' is the motto of the local school in the part of town where Gattu lives. But Gattu is too poor to go to school and he's not always that truthful either. Gattu lives and works very hard at a scrap yard belonging to a man he simply calls 'uncle'. Uncle bought him years ago from his sick father. Gattu is particularly inventive when it comes to thinking up excuses so he can slip away and indulge his passion for kite-flying. Day after day the children love to compete against each other with their kites. They've given the name Kali to one mysterious black kite that dominates the sky; strangely, nobody seems to know who owns it. If Gattu wants to win the next competition he'll have to climb to the highest place in town. This is the school roof, of all places. Gattu manages to creep inside where he assumes command of a small but determined group of pupils. A dramatic battle of the skies ensues during which Gattu uses every trick in the book to claim the lead. But his greatest achievement is when, encouraged by his friendship with his new-found comrades, he decides to tell the truth.