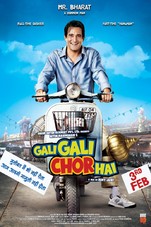 Meet Bharat, the Aam Aadmi, part time cashier and part time "Hanuman" at Ramleela, residing in the city of Bhopal where he lives with his father Shivnarayan, an old timer who values freedom and hopes to see a corruption free administration in the country. Bharat is married to Nisha a schoolteacher, loving and caring but doubting wife concerned more about Bharat's promotion from cashier to manager at the bank than his flying tricks at the 'Ramleela'. The small and happy family lives with a forced upon guest Amita, a young, beautiful girl who works at a call center, forgets her ID at home and likes to hitch a ride with Bharat on his scooter when he is not busy dropping his wife at school. Did I forget to mention, Bharat drives a Scooter, the sidekick of this story. Bharat wants to graduate from his role as 'Hanuman' to 'Lord Ram' someday which is being portrayed by Sattu Thripati, younger brother of MLA Manku Thripati, both having individual problems with him. Sattu, a bad actor is always unhappy that 'Hanuman' steals the show with his performance and Manku the MLA is unhappy over Bharat's refusal to let out his extra room to campaigning for his re-election. Adding Sugar on Spice is the fact that Bharat's father ShivNarayan befriends the opposing candidate Mohanlal and lets out the room to him for his campaign. One night Hawaldar Parshuram Khushwaah comes knocking on Bharat's door informing him about the theft of a Table-fan from his household. Khushwaa orders Bharat to come at the small court where local panwala Bacchu Gulkand, will appear as witness to confess about skilled thief Chunnu Farishta's, actual confession about stealing the fan from his house much to Bharat's reluctance. At the court, firstly the witness fails to turn up, later the judge takes an unduly holiday and Bharat has to appoint a lawyer suggested to him by Chunnu recommended by Khushwaa. Somehow, Bharat manages to bribe his way from the cops to the criminals, from the witness to the lawyer and finally the judge to get his fan back. Now the real act begins for Bharat here onwards, the ordinary fan of everyday usage meant at providing a cool breeze on hot days, turns his life into a metaphorical remark aimed at the system by making this part time cahier slash hanuman into the front page national news heard from lane to lane filled with thieves. How? Let's Find Out India.

Though corruption is a much abused, oft-repeated and oft-depicted theme in Bollywood, what sets GALI GALI CHOR HAI apart is that it incorporates the recent incidents in the narrative. It's relatable and the characters, identifiable.But what could've been a hard-hitting statement against corruption mellows after a point. This happens in the post-interval portions, when things begin to look impractical and ineffectual.On the whole, GALI GALI CHOR HAI amuses intermittently. Fortunately, the movie goes public at a juncture when anti-corruption appears to be the essence of the season. But the film could've done with a far more hard-hitting conclusion!
Taran Adarsh, Bollywood Hungama.com - February 3, 2012

What's Bad: The small-town feel of the film; the lack of real entertainment for the city audience of today; the over-stretching of the drama; the lack of a proper climax.

Verdict: Gali Gali Chor Hai will not get the appreciation of the audience. Given its poor start, it cannot hope to pick up, due to lack of positive word of mouth.

Watch or Not?: Watch it if you want to see a well-intentioned film which also boasts of good performances.
Komal Nahta, Koimoi.com - February 3, 2012

Anchored in the David Dhawan-style of filmmaking, director Rumy Jafry turns a new leaf in this career with Gali Gali Chor Hai, in which he casts a satirical eye on the pressing social concern of our times -- the common man in the grip of corruption.Its timing couldn't have been more correct, with the public mood so intently focused on corruption in the Anna Hazare era. That's probably the only good thing one can say about this film. Otherwise, it's a product of lame writing, inept direction and sincere but ineffective acting. When you do laugh, you mostly laugh at the scene, not along with it.
Shaikh Ayaz, Rediff.com - February 3, 2012

Gali Gali Mein Chor Hain, which was shown to Anna Hazare at a special screening, starts off promisingly with the pro-activist title-track sung by Kailash Kher and there is some fizz in the initial exchanges between Bharat and his father (Satish Kaushik) and the local politicians-cum-goons. But soon the movie loses its comic timing.But in the end, Gali Gali Chor Hai doesn't live up to its promise.Even the impressive supporting cast Satish Kaushik and Annu Kapoor, who relishes the part of a corrupt havaldar, fail to rise above the script's mediocrity. Just like the anti-corruption movement at the moment.
Avijit Ghosh, Times Of India - February 3, 2012