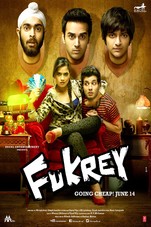 Not yet provided by studio.

Watch All Videos of Fukrey

Fukrey is a smartly directed light comedy of four loafers - Hunny, Choocha, Lali, and Zafar - with modest ambitions. There's a lot to like in Fukrey. It sticks to the subtle and shies away from the tomfoolery and slapstick you've come to expect in films of the genre. However, a few shortcomings keep Fukrey from hitting the bullseye. The crises in the love stories are unconvincing and easily overcome as is the big hurdle in the climax. Fukrey captures a similar spirit, albeit in a very different flavor and the small film experiment about life's trivialities manages to entertain for most part.
Karan Anshuman, Mumbai Mirror - June 14, 2013

Fukrey' is one hell of a laughter ride. In this age of cheesy and cheap comedy which the Hindi film industry is now so (in)famous for churning out, this one – ‘Fukrey’ – despite shouting out ‘Going Cheap June 14’, is thankfully not so. The film is packed with neat amounts of laughter-inducing funny moments and one does not have his/her attention wander off for even a fraction of a second. Watch ‘Fukrey’ if you crave for generous dollops of laughter to colour your weekend up… Go cheap! Three and a half stars for Mrighdeep Singh Lamba’s handiwork!
Ananya Bhattacharya, Zee News - June 14, 2013

Fukrey was a film that heavily disappointed me! As someone who went loaded with expectations, I did not see any honesty in the shallow plot hurriedly translated into a movie. With shabbily etched out characters and their largely flimsy issues, it is the lack of adequate depth in the story that digs its grave.
Mohar Basu, Koimoi.com - June 14, 2013

Fukrey is full-on entertainment although it stops shy of being an outstanding comedy. But the fact that it gets tantalisingly close is no mean feat. For all its flaws, it’s definitely worth a watch.
Saibal Chatterjee, NDTV - June 14, 2013