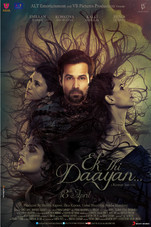 Based on a real cult, this film brings to you the truth you cannot handle. Ek Thi Daayan is an entertaining romantic thriller with an electrifying jolt at the end. Bobo is India’s leading magician. But unknown to even his girlfriend Tamara, Bobo’s life is falling apart. His constant hallucinations leave him with no option but to seek psychiatric help. Going through regression hypnosis, a terrifying story about his childhood surfaces involving a sinister power called Daayan who has not only destroyed his family but also promised to return to haunt Bobo. He chooses to ignore it and move on with his life. Just when his career and love life is at full throttle, enters the irresistible Lisa Dutt. Bobo is convinced that she is the daayan. But is she, really? Or is he just losing his mind?

EK THI DAAYAN is an imaginative and appealing supernatural thriller. The film is placed in a relatable world, with myths about witches expertly intertwined in its absorbing screenplay, something which a spectator can effortlessly identify with. Exceptionally novel and attention-grabbing, it's a first of its kind. Watch it for the sheer novelty it puts on display in its genre!
Taran Adarsh, Bollywood Hungama.com - April 18, 2013

Ek Thi Daayan throws in a lot of it, though there seems room left for a little more. Impressively though, this is the most unusual Bollywood horror film you might have seen.
Vinayak Chakravorty, India Today - April 18, 2013

This film is far ahead of any of the recent horror films that you have watched. Watch it especially for the performances.
Rummana Ahmed, Yahoo! Movies - April 18, 2013

The film sadly is never greater than the sum of its parts. The makers exploit more than a few age-old superstitions associated with witches, but have nothing particularly new or important to say. It nicely builds up intrigue, but leaves you wanting more in the end.
Rajeev Masand, CNN IBN - April 18, 2013