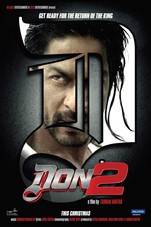 In 2006 with the ever looming dangers of the underworld in Malaysia, Don broke the morale of his associates by infiltrating the gang with an alias and taking advantage of the enmity of Singhania & Vardhaan. He rose to become the undisputed King of the underworld with his shrewd mind and merciless tactics. The police in their pursuit of Don unknowingly hired the very man they were trying to hunt. Don used this to his advantage and let the police and his former associates battle each other while he escaped much to the bewilderment of everyone leaving no traces of evidence of his whereabouts. Having conquered the Asian underworld, Don (Khan) now has his sights set on European domination. In his way are the bosses of the existing European underworld and all law enforcement agencies. The action shifts from Kuala Lumpur to Berlin as Don must avoid assassination or arrest, whichever comes first, in order for his plan to succeed.

DON 2 is SRK's best action movie to date. You cannot tell what Don's next move would be. As the reels unfold, you realize that he's cold blooded. You can't mess with him. He's dangerous to deal with. He has an agenda. Ditto for Roma [Priyanka Chopra], who shares a tumultuous relationship with Don. It's a cat and mouse chase.
Taran Adarsh, Bollywood Hungama.com - December 23, 2011

What's Good: The engaging post-interval portion, Shah Rukh Khan's endearing performance; the canvas; the stylised acting and narration; the revelation of the suspense.

What's Bad: The slow-paced first half; the technical details in the drama which will confuse a section of the audience; the music; the boring portions which spring up at several places.

Verdict: Don 2 is a winner. It will score at the box-office and yield good profits to all concerned.

Loo break: A couple in the first half.

Watch or Not?: Definitely watch it for Shah Rukh Khan's performance and the stylised narration.
Komal Nahta, Koimoi.com - December 23, 2011

Don 2 is nicely shot, and there are moments where Shah Rukh Khan is riveting. But that's not enough to hold your interest for well over two hours...even the actor's most loyal fans will find themselves yawning. I'm going with a generous two out of five for director Farhan Akhtar's Don 2. Although packed with fast cars and bikes, this is one slow ride.
Rajeev Masand, CNN IBN - December 23, 2011