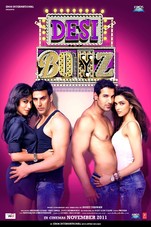 The year is 2009. The world has been struck by the financial meltdown. But Nick Mathur and Jerry Patel don't feel a thing in their comfortable pad in London. Nick feels smug with his successful investment banking job, the new bonus in his pocket and his beautiful fiancÃ©, Radhika, by his side, while Jerry is so used to scraping the bottom of the barrel and living off his best buddy Nick, that recession feels like home. But life has a way of pulling the rug from under our feet. Nick and Jerry stop smiling the day Nick's company decides to downsize and unceremoniously fires him. And Jerry is informed by the Social Services that his nephew Veer, whose local guardian Jerry is will be placed in a foster home unless he gets a steady job. Desi Boyz is the story of two men who are forced to do something extremely bizarre which gives them instant gratification but the repercussions tear them apart and its aftermath which tests everything including their friendship.

Watch All Videos of Desi Boyz