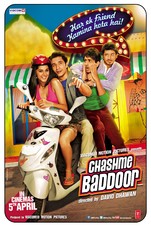 Sid, Jai and Omi (Ali Zafar, Siddharth and Divyendu Sharma respectively) live together in a small house in Goa. Large on life, wants and everything else, the only thing that seems to keep Omi and Jai going is the women in Goa. Sid, on the other hand, lives a straight and normal life. The two womanizing slackers, Omi and Jai, now attempt to woo the new girl Neha (Taapsee Pannu) in the neighborhood. A series of lies, secrets and comical situations is what follows, making the flick a thoroughly enjoyable family outing!

Watch All Videos of Chashme Baddoor

The answer's yes - love can be remade and so can a lovely film like 1981's Chashme Buddoor (CB). This version's as different as paapri chaat from a dhokla. But it retains the original's madness, masti and movie-mania. But the star remains the story, spicily modernized, yet its salt still that passion for filmi fun, rainy moments, shared chattris, judwaa bhais, overpowering Ma's, red coats-yellow pants (Dhawan clearly enjoying a Govinda flashback), cheap shers, cheaper lusts and triumphant love. Watch it zaroor. NOTE: You will not like this movie if you don't like corny, occasionally bawdy jokes.
Srijana Mitra Das, Times Of India - April 5, 2013

CHASHME BADDOOR encompasses the spirit of the original, but has been customised to entice the present-day spectators. An entertainer with dollops of humour and wild situations thrown in, this one's a laugh-riot that should not be missed!
Taran Adarsh, Bollywood Hungama.com - April 5, 2013

If you're willing to leave the memory of the earlier film at the door, there's a chance you might enjoy the rat-a-tat sparring between the leads, and you might even find yourself chuckling at some of the crude humour. Like junk food, it has no nutritional value. But an occasional bite doesn't hurt.
Rajeev Masand, CNN IBN - April 5, 2013

Chashme Buddoor delivers the occasional laugh but the level of the joke is someone slapping someone else or a tired Bollywood reference. If you can settle for that, check it out.
Anupama Chopra, Hindustan Times - April 5, 2013