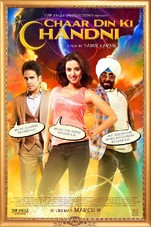 Chaar Din Ki Chandni true to its title is a Comedy with the essence of romance, set against the backdrop of Rajasthan at a four-day wedding. A complete family entertainer revolves around a Rajput family and a family from Punjab, who are caught in a situation to create the comedy of errors. In words to say both are SINGHS but who is the real KING.

CHAAR DIN KI CHANDNI is not a movie to be taken seriously. Neither does it boast of an intensely ingenious tale. Nor is there an intellectual appealing screenplay in place, right from commencement till the very conclusion. But what keeps the film going are some ridiculously comical sequences. Despite the emphasis on barmy and wacky situations, despite the jokes being puerile and infantile, the movie keeps you entertained for most parts, especially in its second hour. The motive, therefore, is served. On the whole, uninhibited and naughty, CHAAR DIN KI CHANDNI is an enjoyable madcap comic caper with adequate frenzied moments to keep you in your seats. A good laugh is assured!
Taran Adarsh, Bollywood Hungama.com - March 9, 2012

What's Bad: The ordinary first half; the less developed romantic track; the other songs, besides the two good numbers.

Verdict: Chaar Din Ki Chandni is an entertaining and enjoyable fare which will keep the audience in splits.

Watch or Not?: Watch it for feeling truly refreshed with the mad-hatter comedy.
Komal Nahta, Koimoi.com - March 9, 2012

Like a shaadi ka band, Chaar Din Ki Chandni's tone is mostly raucous - and good fun. Its script crosses swords with British writer P G Wodehouse's zany plots (castle full of imposters, suspicious uncles, a mosquito-bitten Johnny Lever) while paying hurried homage to masala-mixed Bollywood, leaving little time to worry about subtlety or depth. CDKC is a movie made by Bollywood-lovers for those who like their cinema pretention-free. With tongue-in-cheek Deewar-to-Dabangg references, sometimes its humour (gay jokes, visually-challenged Sardars) can be way overcooked. But mostly, with its feisty heroine (who does a mean kick in a lehenga), its hilarious hero, some sweet chemistry, jokes involving the colour 'rad' and agreeable actors sprinkled around, CDKC is a breezy watch - with no dark night.
Srijana Mitra Das, Times Of India - March 9, 2012

This is a film which was intended to be a farce aiming for moments which have the audience in splits or at the least breaking into a smile. The sound engineer has given us very convenient pauses for the same. In the same vein as Hum Tum Shabana, Char Din Ki Chandni lacks a single LOL moment. There are no gags which can take the film forward.This film is best avoided unless you want to see how the classic Yash Chopra hit song "Chandni, Tu Meri Chandni" has been ruthlessly murdered.
Preeti Arora, Rediff.com - March 9, 2012