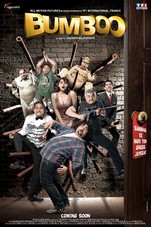 BUMBOO is a story based on the idea that in this life we all meet someone who comes and screws it all up (ya phir jisko bambiyaa bhashaa mai hum Vaat lagna kehte hai). Each character in the film screws someones happiness which create extremely humourous situations and rib tickling comedy.

You know that thing called 'thay-ter' - where people go on stage, speak really loudly, open their eyes wide and laugh uproariously to make their point? Well, 'thay-ter' can be good - but transported to cinema, it can stretch a bit thin. And feature some awkward moments - of which Bumboo has a few. Except for the 'thay-ter' - that wide-eyed overacting with incessant PJs, gay no-jokes, even some vomiting. Peppy background music lifts the bar frequently while cracks on screwdrivers and biwi-chors help. But Bumboo gets shafted by its lapses into lavatory humour - and too much thay-ter for cinema.
Srijana Mitra Das, Times Of India - March 30, 2012

The good thing about 'Bumboo' is its climax. You can certainly laugh towards the end. And yes, Mika Singh's song during the credits is worth dancing.Message of the film fails to reach the spectator because Sanjay Mishra gives a really long 'speech' before coming to the crux of the matter.'Bumboo' is a film made with good intentions but somehow the makers couldn't transform the original idea onto the celluloid.You can always watch 'Bumboo' to support the storytellers who dare to go against the established market norms.
Rohit Vats, CNN IBN - March 30, 2012

The film is supposed to be funny, but the boring and chaotic situations keep the motive away from the film and seem to be a far-fetched dream. The story is unnecessarily dragged in the second half and makes you sit at the edge of your seat, just to run away. In the movie, 'Bumboo' signifies troubled waters (vaat lagna) and if you wish to be away from such an experience, this movie is strictly prohibited. If you are still looking for a reason to buy a ticket then talented actors like Sharat Saxena, Sanjay Mishra and Kavin Dave trying their best to make you laugh, could be one possible reason to give it a try.
Daily Bhaskar, Dainik Bhaskar - March 30, 2012

BUMBOO boasts of an interesting concept. Unfortunately, the writing is painfully taxing, while the execution is plain amateurish, especially the closing stages of the movie. What also makes the movie-going experience cumbersome is the fact that the scenes are stretched for no reason and the laughs are scarce and forced. A man saves the life of a stranger and lives to regret it... Ideally, the black comedy had the potential to have you rolling in the aisles. But the Hindi adaptation is sketchy and theatrical at most times.On the whole, BUMBOO tries too hard to be funny and that's why it misfires. Besides, a weak script, abrupt conclusion and bizarre characters only go against it!
Taran Adarsh, Bollywood Hungama.com - March 30, 2012