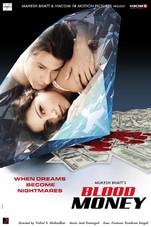 BLOOD MONEY narrates the story of Kunal [Kunal Kemmu] and his wife Arzoo [Amrita Puri], who move to Cape Town after Kunal procures a job with a leading diamond export firm run by Zaveri [Manish Chaudhuri] and his brother [Sandiip Sikcand]. The perks of the job includes a plush mansion, a swanky car and of course, all the opulence that money can procure. Gradually, Kunal finds himself trapped in the midst of a structured white collar crime conglomerate. How he struggles to get out of it forms the remainder of this story.

Watch All Videos of Blood Money

This one has all the toppings of a 'Bhatt shocker' - drama, emotion, tragedy and some sex. Once again they push the bedroom threshold - a semi-erotic, steamy scene between two women - every man's turn-on fantasy. Debutant director, (Vishal S Mahadkar), tells the story well, though some scenes are very stretched, and tries too hard to provoke a reaction. A faster pace, more potent dialogues, not to add some more dum in Kunal's voice, and a better background score - would have had greater impact. While this one is engaging, it's not the 'rock' you'd die for.
Madhureeta Mukherjee, Times Of India - March 30, 2012

Filmed indifferently, and without infusing the urgency that this kind of plot demands, first-time director Vishal Mahadkar delivers a bore-a-thon of a movie, complete with archaic dialogues and stereotypes for characters. Predictable from start to finish, the movie unfolds at an excruciatingly slow pace, and throws up no surprises - not even the 'twist' in the end, which you will more than likely guess. Even the film's key plot-point - the crisis of conscience that our hero goes through - is treated so matter-of-factly that you can't help wondering if the director was as tuned-off as you are.I'm going with one-and-a-half out of five for Blood Money. Watch it if you're having trouble sleeping lately.
Rajeev Masand, CNN IBN - March 30, 2012

The protagonist and his emotions in BLOOD MONEY are very relevant and relatable. He imagines life like every other man. In fact, anyone who aspires to make his/her life superior would be able to relate to the passion of this guy. However, after an extremely absorbing initiation, after establishing the plot so well in the first hour, the film falters towards its post-interval portions. The typical middle class guy, all of a sudden, starts punching the villain's brawny henchmen, after giving them a good chase. Despite being viciously stabbed. Unexpectedly, from a credible, plausible zone, the film deviates into a hard-to-absorb masala-ridden fare that relies on heroism and intrepidness to prove a point. A persuasive culmination, in keeping with the quintessence of the film, would've only enhanced the impact of the second hour.On the whole, BLOOD MONEY is old wine with a brand new label. A decent and absorbing first hour coupled with soulful music are its aces, although the mediocre, outmoded writing in the post-interval portions leave you a little miffed. At best, a fair attempt!
Taran Adarsh, Bollywood Hungama.com - March 30, 2012

Only this is not The Firm and its sloppily written script is incapable of constructing gravity or drama. Blood Money is inexcusably one-note and short on buildup -- things just happen one after the other like a flat, muted series of badly-shot stilted music videos.You don't have to be a diamond expert to tell a gem from a pebble. And so, unless stale stories, bad acting and bungled possibilities capture your fancy, Blood Money is much too sluggish, simplistic and boring to bother.
Sukanya Verma, Rediff.com - March 30, 2012